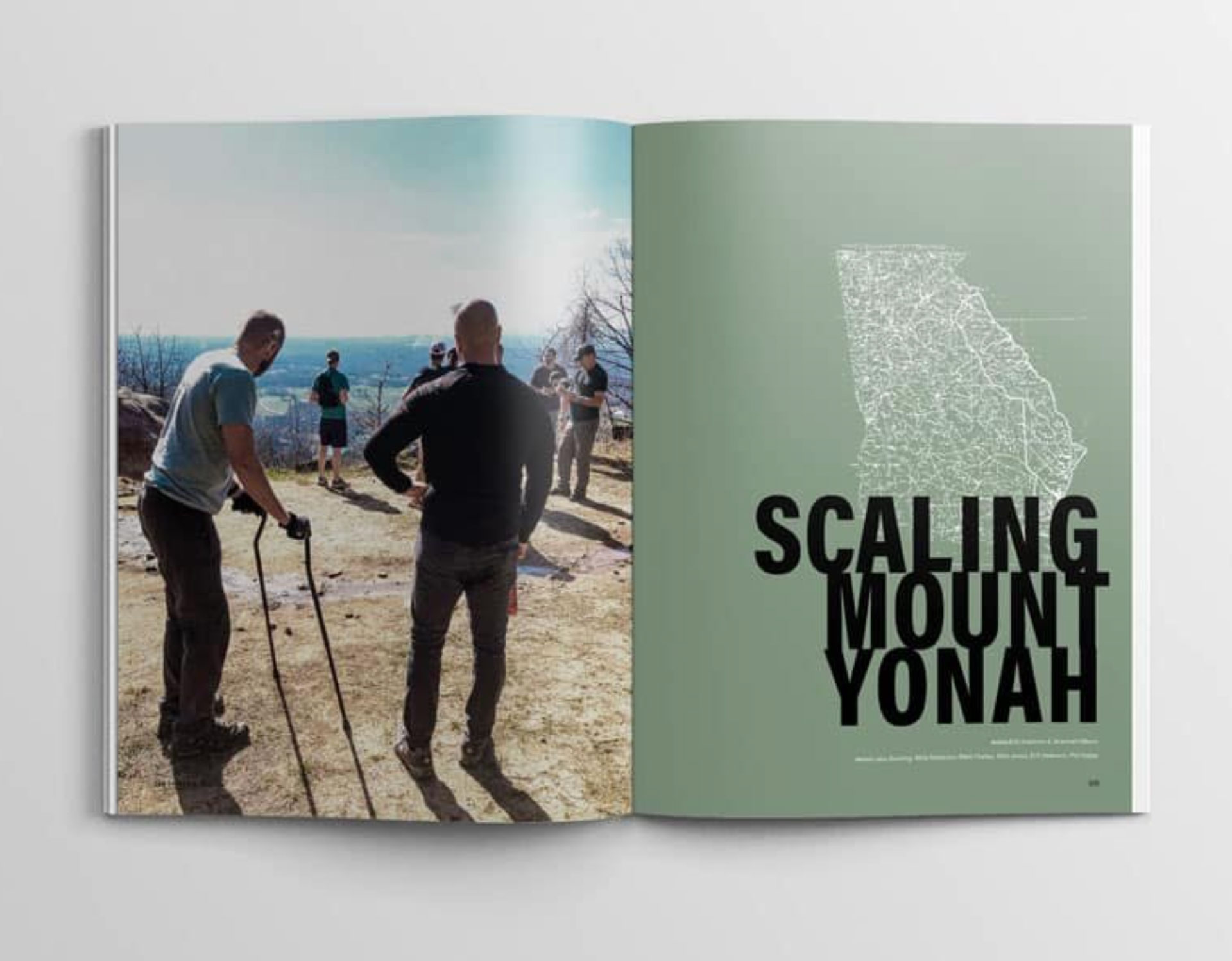 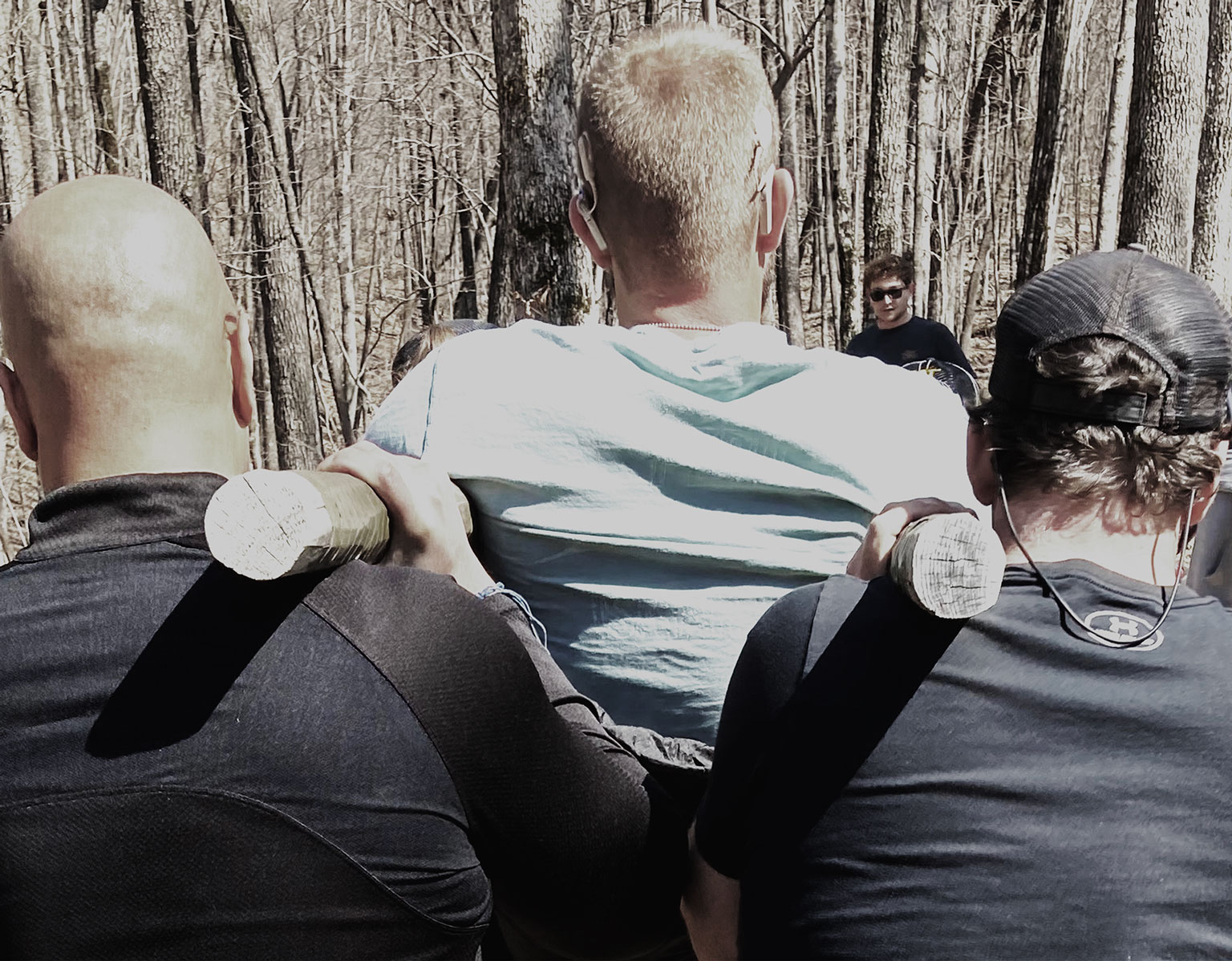 It was day three of Wild at Heart Basic in White County, Ga. There was an open invite to hike Mount Yonah (Cherokee word for bear). The trek is 4.4 miles with just over 1,500 feet gained in elevation not nothing, especially for a novice.

During lunch, one man from our group stood to announce a plan birthed 10 minutes prior. For any willing to join, the aim was to get Jeremiah as far up the mountain as possible. Jeremiah Means is taller than any man who was there and weighs in at just over 200 pounds (mostly muscle mass). A brain injury 11 years ago impacted his sight, hearing and motor control in varying degrees. In his words, the incident took him from 6’4” to 4’2”. Jeremiah has massive upper body strength from manning a wheelchair for over a decade. He can split wood from a seated position. And his heart, intellect and will rival the power in his forearms. One discernible weakness (which is common to most men and which he is apt to admit) is a reluctance to ask for and receive help. But the challenge had been issued. Some of us were pressed to believe it would be possible to carry him that far (though we didn’t voice our doubts). And Jeremiah was being pressed to consent to being carried.

The initial suggestion was to attempt fireman’s carry and cart him up on our backs. What the proposal lacked in wisdom it made up for in zeal. Someone quickly offered an alternative plan. We would build a litter.

Full article available in Volume 7 of the AND SONS Magazine 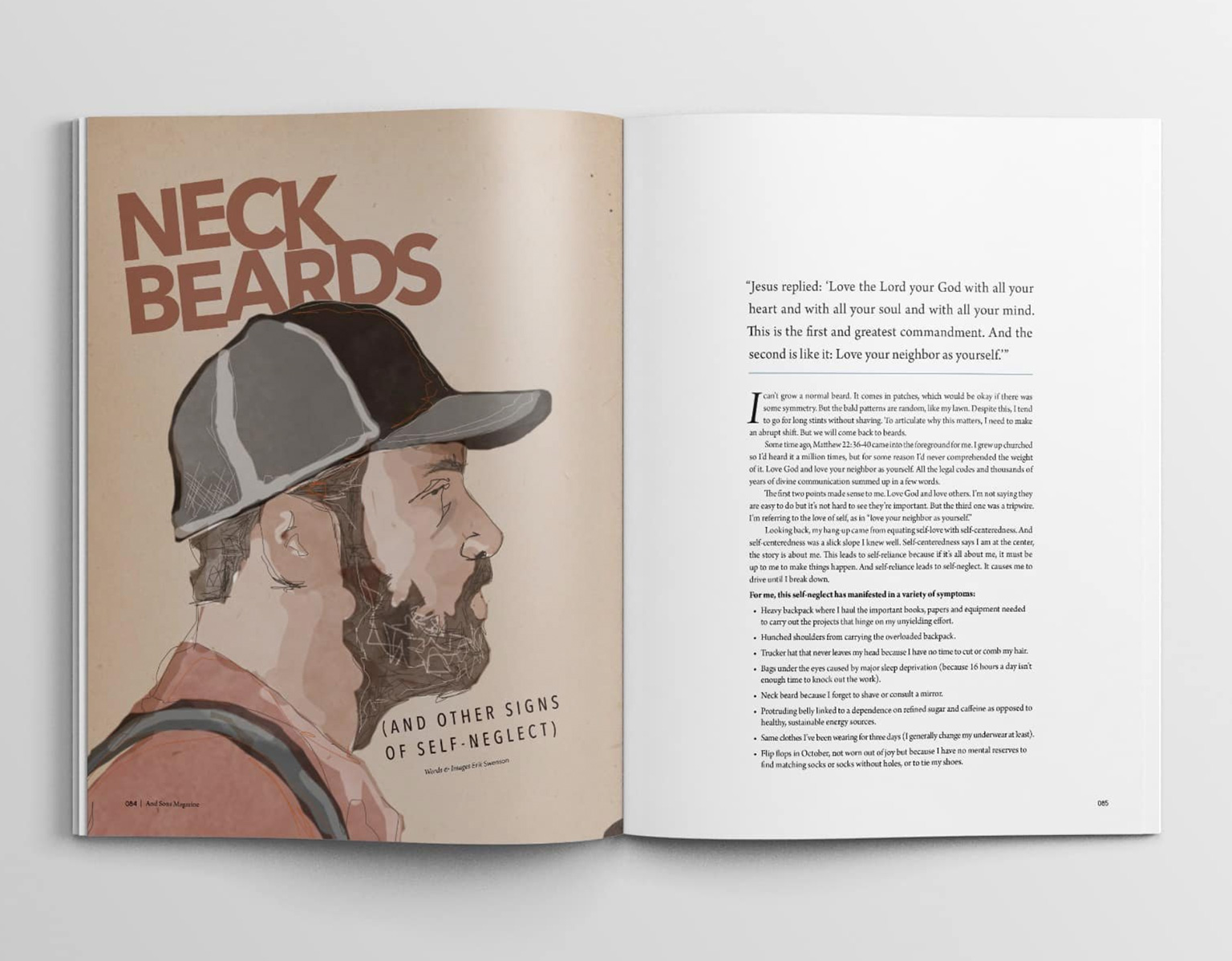 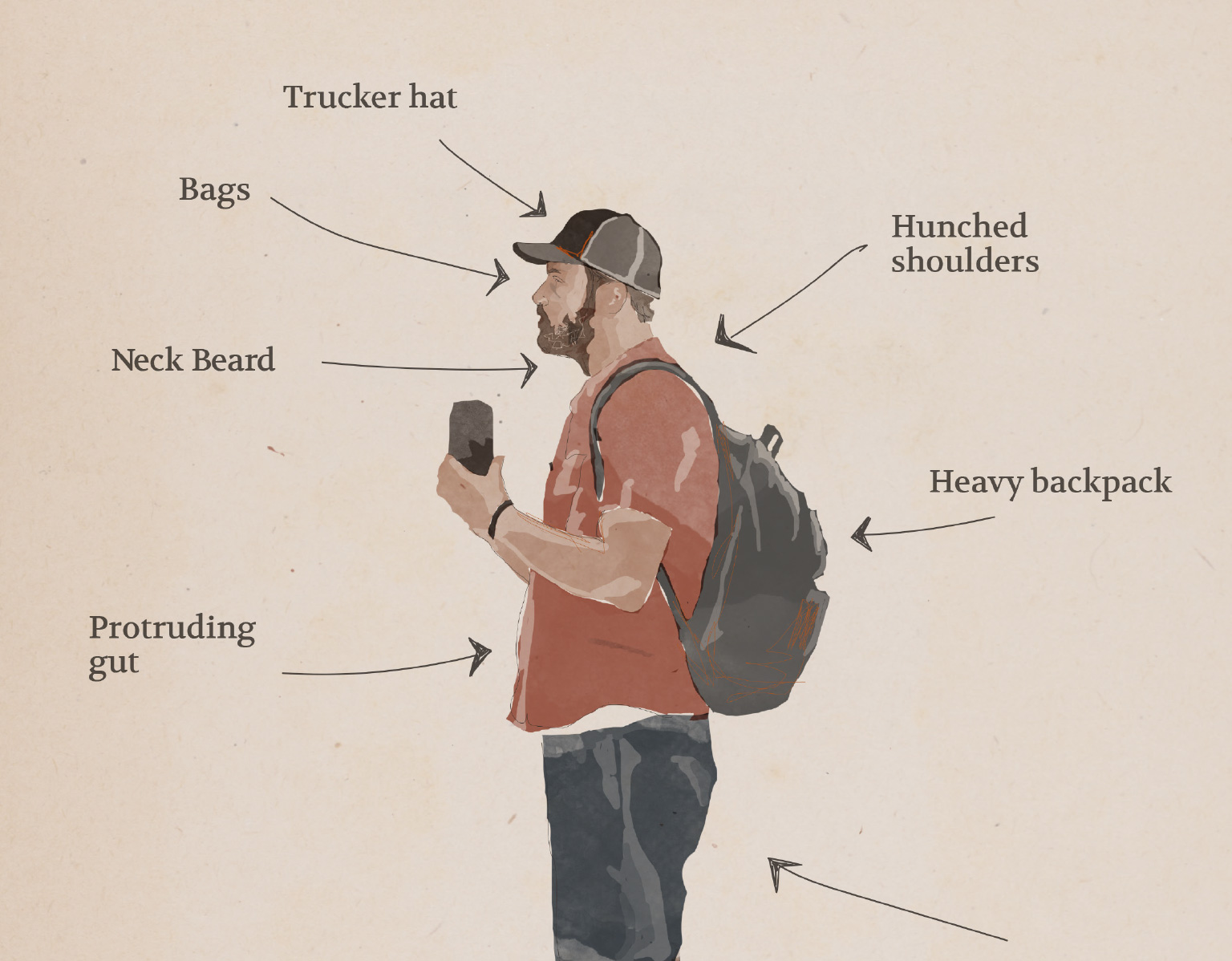 Neck Beards (And Other Signs of Self-Neglect): Words and Art by Erik Swenson

I can’t grow a normal beard. It comes in patches, which would be ok if there was some symmetry. But the bald patterns are random, like my lawn. Despite this, I tend to go for long stints without shaving. To articulate why this matters I need to make an abrupt shift. But we will come back to beards.

Some time ago Matthew 22:36-40 came into the foreground for me. I grew up churched so I’d heard it a million times but for some reason I’d never com- prehended the weight of it. Love God and love your neighbor as yourself. All the legal codes and thousands of years of divine communication summed up in a few words.

The first two points made sense to me. Love God and love others. I’m not saying they are easy to do but it’s not hard to see they’re important. But the third one was a tripwire. I’m referring to the love of self, as in “love your neighbor as yourself.”

Looking back, my hang-up came from equating self-love with self-cen- teredness. And self-centeredness was a slick slope I knew well. Self-centeredness says I am at the center, the story is about me. This leads to self-reliance because if it all about me, it must be up to me to make things happen. And self-reliance leads to self-neglect. It causes me to drive until I break down.

Full article available in Volume 8 of the AND SONS Magazine

THE FIGHT TO KEEP HEART 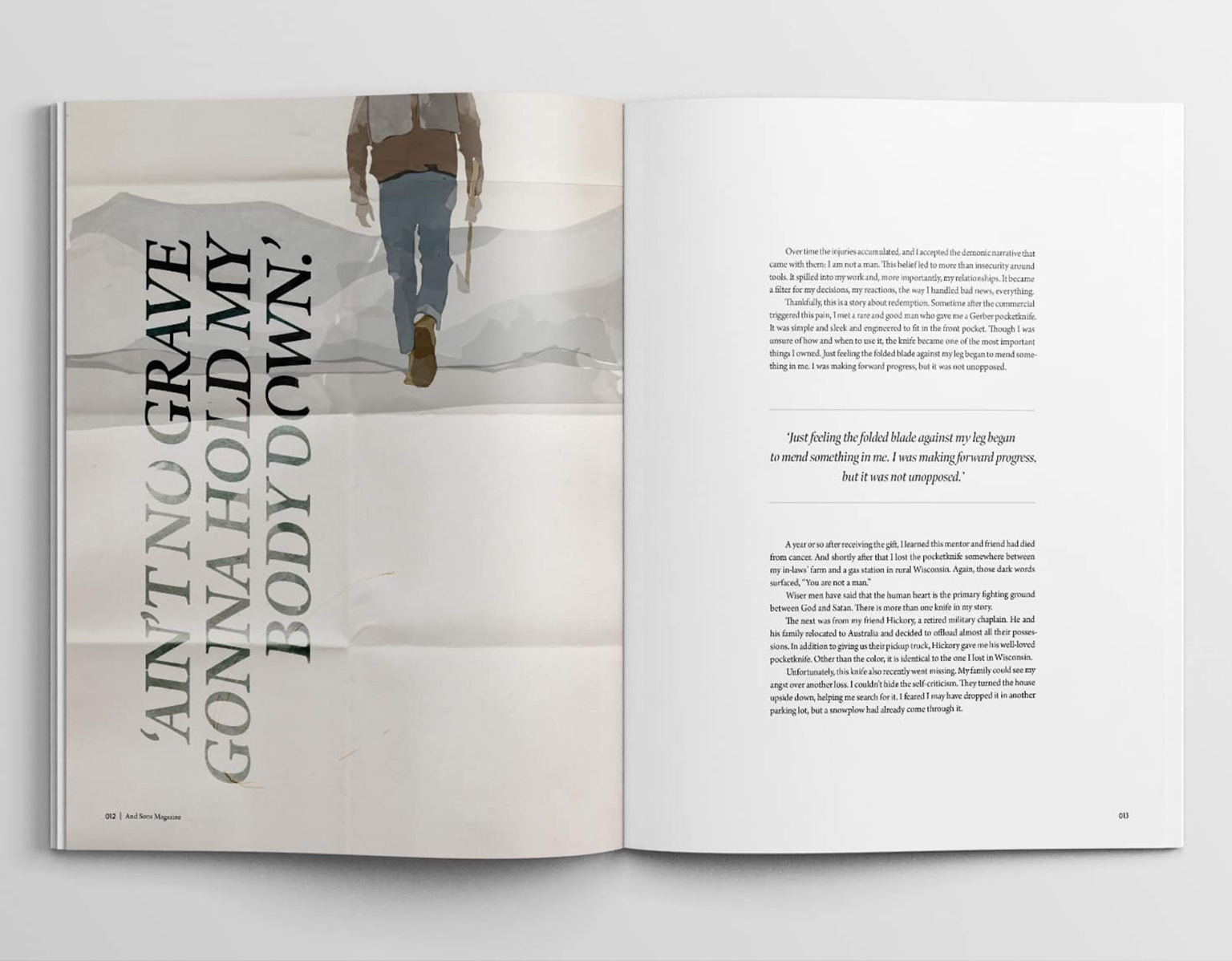 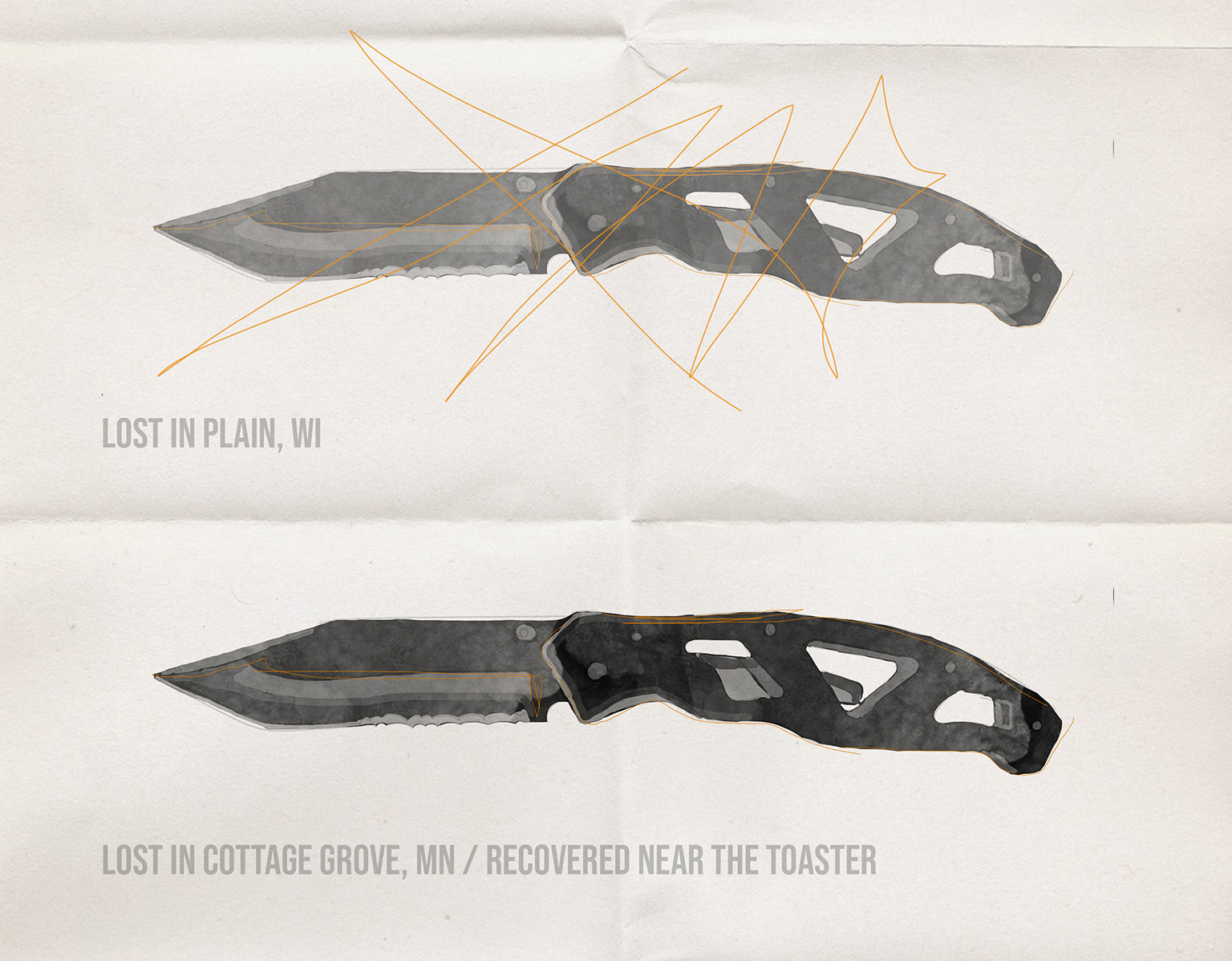 The Fight to Keep Heart (And All My Appendages): Words and Art by Erik Swenson

Somewhere between ages 10 and 15, my grandma on my dad’s side gave me the three best Christmas gifts on record: a hatchet, a Swiss Army knife and a wrist rocket (strong enough to kill a small rodent). She understood that part of a boy’s heart needs to dance with danger.

Of the gifts given by my grandma, the hatchet was the most significant. And that is because of the injury. The air had a bite to it the first time I took the tool into the woods. I saw a young tree with a chest-level branch roughly an inch in diameter. Bracing the trunk above the branch with my left hand, I raised the hatchet in my right. The blow landed where I’d aimed but lacked follow through, causing the hatchet to kick back and land on top of my left hand. The ice water flowing from the hose washed away enough blood to assess the injury. A gaping cut on the middle knuckle of my middle finger went clear to the bone.

Though it is vivid now, I’d buried that memory. Then a few years ago I saw a commercial that took me back. It was an ad for Gerber Knives introduced to me by God via the ministry of Become Good Soil. I was conflicted as I watched this beautiful montage of men confronting a wild world. Everything from swelling rivers to violent winds to screaming grizzlies. In some cases, the men wielded knives, but in every case, they seemed unfazed by the trouble staring them in the face. The reel of images was complemented by melody that sounded like bluegrass, gospel and pure survival. The simple chorus rang in my heart: Ain’t no grave gonna hold my body down.

Full article available in Volume 9 of the AND SONS Magazine